India is the 3rd largest consumer market and the 5th largest exporter of textile in the world with domestic consumption of US$ 97 billion and exports worth US$ 40 billion. The huge availability of textile raw material such as wool, silk jute, and cotton made India a sourcing hub. The textiles industry of India accounts for 24% of the world's total spindle capacity and about 8% of the total rotor capacity of the world. India’s textile industry plays a very important role in the national economy for net foreign exchange earnings. India’s textiles industry contributed 13% of the industrial production in FY20. It gave employment to more than 4.5 crore workers including 35.22 lakh handloom workers in FY20 and also contributed  2.3% to the GDP of India. The sector contributed 12% to India’s export earnings in FY20. From  US$ 22.95 billion in FY20  India’s textiles and apparel, export is expected to increase to US$ 82.00 billion by 2021. In the last five years, the textiles sector has witnessed a sharp rise in investment. The industry received Foreign Direct Investment worth US$ 3.45 billion from April 2000 to June 2020. By 2024, exports in the textiles & garments industry are expected to reach US$ 300 billion. Textile and apparel industry exports are forecasted to reach $300 bn by 2024-25.

Indian textile is unique in comparison to the other countries because of its traditions which provide the industry with the capacity to produce a variety of products catering to the needs of different market segments both in India as well as for the entire world. 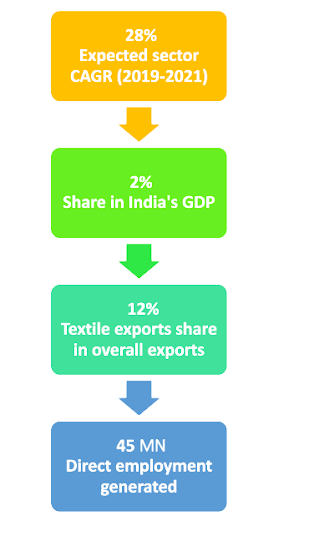 The textile industry encompasses a range of industries that utilize a variety of natural and synthetic fibers to produce fabrics. The textile industry can be divided into two categories, namely the organized mill sector and the unorganized mill sector. Various initiatives are being made to take urgent and adequate steps to attract investment and encourage widespread development and growth in the unorganized sector.

The Indian textile industry can be divided into many segments such as: 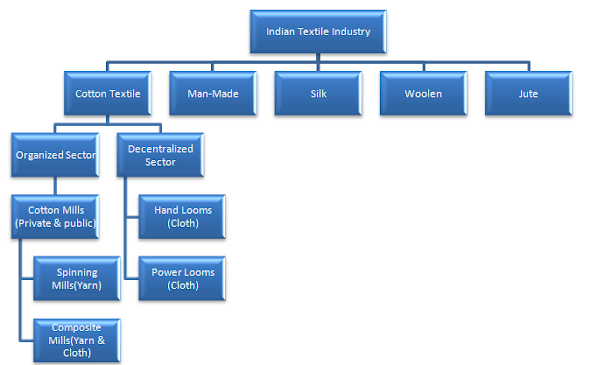 India is the 3rd largest consumer market and the 5th largest exporter of textile in the world with domestic consumption of US$ 97 billion an...